So who will form part of the new England coaching set up when Martin Johnson is finally crowned new rugby supremo, or head coach, or manager, or tea boy, or whatever the hell it is that the RFU have in mind?

Names that have been liberally sprinkled around the popular and not-so-popular press include Shaun Edwards, Austin Healy, Mike Catt, Pat Howard, Neil Back and Will Greenwood. One name that has not been mentioned so far is Tory London Mayoral candidate and David Strettle-lookalike, Boris Johnson. 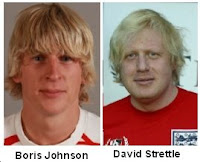 Not only is Boris the spitting image of the blonde mop-headed England winger, he also has a rock solid defensive game and would be ideal to instill the blitz defence into the England team. Just look at how he tackled the German winger in the England v Germany Legends match a couple of years ago. OK, admittedly he was playing football and not rugby, but you can't fault his commitment.

"There was no malice in my actions. I was going for the ball with my head, which I understand is a legitimate move," Boris reportedly said afterwards.

who says these legends are not competitive?