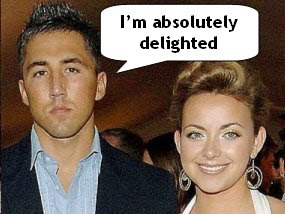 The ELVs? A mere distraction.
Martin Johnson's England? Hardly worth a second thought.
No, the story that REALLY matters this week is (at least according to NOW magazine) that the families of tango-boy Gavin Henson and his missus Charlotte Church are "at war" over the arrival of the couple's new baby later this year.
You heard it hear first (unless you are a subscriber to that quality periodical of course) - the big rugby story this week is that, while Charlotte's Mum (Maria) is "thrilled" at the news, apparently Henson's Mum and Dad (Audrey and Alan) are "shocked" to learn that son is to be a father again at the tender age of 26.
The magazine's "source" (not, repeat not, the lady that brings round the cake trolley at 4 o'clock) says that Gav's parents feel that it’s too soon, that their boy should concentrate on building his career and that too many children will distract him.
"They’re also worried that he’s become more obsessed with the idea of being a celebrity rather than concentrating on his rugby," says Doris from accounts.
What do you think? Should Gavin and Charlotte have more kids? Should Gavin ditch his family and focus on rugby glory with Wales? Should he change his brand of fake tan? Should I even be typing this?
Posted by Total Flanker at 08:43

"rugby glory with Wales" - now that's an oxymoron if ever I've heard one!!

It's all relative Karl - the occasional 6 Nations Grand Slam is considered "glory" in the principality - witness the ridiculously over-the-top celebrations in 2005 and this year (almost as silly as awarding OBEs to the entire England RWC winning squad in 2003 and giving Clive a knighthood).

I say have your kids when you are young. Who wants to be changing dirty nappies in your thirties or forties.(Although in my case, being a grandparent at 47 does not quite count)

My wife and I had Ian and Rachel when I was 26 and 30. I'm glad I had them when I was young. I personally think it's between Gavin Henson and his nubile songbird of a bride. He should tell his parents(respectfully) where to go...

The biggest question TF, is how YOU came across this article in NOW magazine....

If having more kids does for his form what the first one did, then go for a whole team. If servicing his missus pregnant is too much on top of Welsh training, I am more than willing to help out.