The Voice of Reason (and he's Australian) 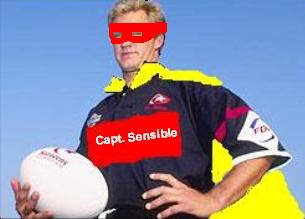 Australian legend Michael Lynagh, the eminently sensible and all-round-nice-bloke and my new favourite Aussie, has reportedly come back from the dark side and is joining in the chorus of the voices of reason in calling for the vast majority of the ELVs to be abandoned.

Lynagh, it is reported, believes the bulk of the ELVs have had a negative effect on rugby.

"The more I see the new rules the more I think it's just league with extra players," he says.

Just one of the ELVs meets with Lynagh's approval.

"Stopping teams being able to pass the ball back into the 22m is common sense," he says. "That rule should be kept because it means running fullbacks and wings will be brought back into the game."

I'm not so sure about that myself as evidence suggests that teams are kicking in-field more from their 22 but, as with many other northern-hemisphere dinosaurs, I am in total accord with Lynagh's hatred of the whole principal of awarding free kicks instead of penalties for all manner of offences, and his belief that the lack of an appropriate sanction just gives negative teams more latitude to cheat.

Lynagh even hits out at the one change that I thought might actually improve attacking play...

"The five-metre rule at scrums has actually negated teams going wide because you hit the gain line immediately if you just keep it in the No 9-10 channel so teams do that every time," he says. "That's why I say it just looks like 15-man league."

I would love to see what Matt at Green and Gold thinks about an Aussie legend trashing the ElV's...

I think you will find that the ELVs were proposed by an IRB thinktank that had more than just Australian representation.

BTW If you look hard enough you might find some English legends who are supportive of the ELVs.

Mate, no one's saying that the ELVs are an Australian invention - we all know they were drawn up by an unrepresentative bunch of blokes at the IRB.

What isn't in doubt though is that the ELVs have been seized upon by John O'Neill as the supposed saviour of Aussie rugby, and it's reached the point where any doubts or criticisms raised against them are just being dismissed as paranoia by northern hemisphere dinosaurs resistant to change of any kind.

The IRB, having invested so much time and effort in the ELVs, appear desperate to see them made law and so bombard us with stats to show that the ball is in play longer ergo the game is better.

What no one seems to be looking at is whether the quality of rugby in Super 14 this year was better than in previous years (comparing like with like rather than getting into a "our competition is better than yours" type slanging match). From what I saw the excitement on offer was unchanged, ditto the quality - after all Super 14 has always provided open attractive rugby. What I hated, though, were the seemingly huge number of stoppages for free kicks in some matches which, in my opinion, radically altered the rhythm of rugby as I know it. It's this fundamental change in the nature of the game that I object to - it's not that the game under the new laws look like rugby league, it's that it FEELS like rugby league, having lost its traditional points of reference.

Who cares about ELV'S I think your the greatest Michel Lynagh.