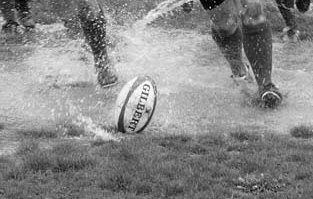 For those of you arriving via Google expecting this post to have something to do with Mr. Marty Pellow and colleagues, my apologies for wasting your time.

Yesterday saw the fourth fixture of the season for Chesham Vets, this time at home against our Beaconsfield equivalents. The same team had cried off against us twice last season, so well done boys for showing up this time around.

Although not actually raining yesterday, conditions underfoot can only be described as wet, wet, wet. Not the wettest I've ever played in - that honour undoubtedly goes to a 1990 tour match against Nondescripts RFC in Nairobi played in an ankle-deep swamp - but, after a rapid thaw in last week's frozen conditions and torrential overnight rain, yesterday's pitch was fairly sodden and it didn't take long for the forwards to take on the appearance of a forlorn bunch of drowned rats.

Any thoughts that last season Beaconsfield might have been running scared were soon laid to rest as they came tearing out of the blocks and made light of the conditions (and made good use of the chilly breeze in their favour) with some deft running and handling that had us scrambling in defence. I can honestly say that, for the first 30 minutes we were stuck in our own half, most of it in the bottom right corner of our own 22. This was partly down to the opposition's excellent play and partly down to our own wayward kicking, but the net result was that I spent the whole of that first half hour either making tackles or falling on loose ball in the swamp. I must have made a dozen or so tackles in that period, probably more than in the rest of the season so far and somehow, through a combination of desperate defence, a slippery ball and a huge slice of good fortune, our line remained intact.

Eventually we managed to lift the siege and mount one or two attacks of our own but, ironically, this led to our downfall as Beaconsfield counter-attacked and eventually drove over from a free kick close to our line.

So, 7-0 down at half time but with the elements in our favour and everything to play for but early in the second half we were guilty of going to sleep en masse, allowing Beaconsfield a soft second try. Firstly we stood waiting for the referee to blow up for a Beaconsfield forward blatantly holding onto the ball after a tackle and then, when the ball was moved out to their fly half, our backs collectively fell hook, line and sinker for the simplest of dummies as the no.10 strolled over the line.

From that point on the game opened up, largely as a result of skipper Colin entering the fray from the bench where he had been nursing the mother of all hangovers. We were certainly giving as good as we got and, although struggling in the lineout, we were dominating the scrums and it was from this phase that we clawed our way back into the game. Pressure on the opposition put-in on our 22 metre line led to a mix up between two Beaconsfield players with the net result that I managed to intercept a wild pass and started haring (albeit at a slightly more sedate pace than a hare) towards the Beaconsfield line. In the words of the great Yogi Berra, it was "like déjà vu all over again," although never let it be said that I don't learn from my mistakes. With a good 60 metres left to go and with my abortive attempt against High Wycombe in September flashing through my mind, I realised that there was very little chance of me making it the whole way and, on hearing a shout of "Look right," I decided that the only course of action was to hoof the ball as far as I could downfield. Fortunately the shout had come from Eric, our centre, probably the quickest player in the team, and he raced after the ball, hacked it on and dived over for his second try in as many games.

So, 14-5 down and game on - and we had a number of opportunities to reduce the deficit further before Beaconsfield sealed the game with a late try, their fly half cleverly chipping the ball over our blind side defence and behind our non-existent cover for one of their forwards to collect and lumber over.

Final score was a 21-5 defeat but I must say it was a hugely enjoyable experience despite the scoreline and the conditions. I had possibly my most productive game since my return to rugby (a testament to my one-week fitness campaign!) and the fact that I didn't realise how cold I was until after the final whistle shows the extent of my involvement. Playing eighty minutes (and yes, the ref made us play every damned one of them) in soaking wet kit in a chilly breeze left me and several others shivering almost uncontrollably in the changing rooms afterwards and it wasn't until after a hearty meal much later last night that I finally began to warm up on the inside.

Of course today the chill has gone to be replaced by aches and pains virtually everywhere on my body...as if that was at all unexpected!

As a team I reckon we played well enough in patches to suggest that a victory might not be too far way - scoring more than one try per game might be a good start though. Tring 4ths again at home on 7th February is our next fixture - I know I'll regret this later but BRING IT ON!
Posted by Total Flanker at 16:53

Good on ya, Flanker. Way to do us a gray-beards proud.