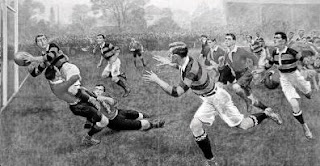 Ring the bells, sound the trumpets, crack open the champagne and hang out the bunting to celebrate not only the first victory of the season for Chesham Vets, but the first victory I've been part of since my return to this wonderful game of ours in October 2007.

Yes, believe it or not, we actually won a match yesterday afternoon. I guess it had to happen sooner or later but, after a couple of close calls (and one or two not so close) this season, I was beginning to believe we were destined to be perpetual gallant losers.

That particular monkey is now off our backs and it's a strangely exhilarating feeling, although immediately post-match it was difficult to know how to react. Remember - I hadn't been part of a winning team since 1993!

Things began to look promising when I turned up at the club an hour before kick off to the news that we were no longer playing High Wycombe Vets (always a difficult fixture) but were instead matched against the unknown qualities of Datchworth 4th XV. The news that we also had an unprecedented 20 players available, including a spare prop, was also a good sign.

We kicked off in extremely blustery conditions and got off to the usual Chesham start, not really getting into the game at all to begin with. Datchworth had one or two strong runners that we failed to put down first time, and we allowed them to build up momentum by failing to commit to the breakdown in sufficient numbers. When we did win the ball we tried to chuck it around sevens-style which, in the conditions and given that we hadn't really established any kind of platform, meant that invariably we were chasing back behind the gain line to retrieve spilled passes - and one Keystone Cops episode saw us win ball near halfway but end up, via a series of horrible passes, scrabbling around on our own try line trying to prevent the opposition scoring.

Eventually our inertia was duly rewarded when a Datchworth prop showed an alarming turn of speed to burst through a couple of tackles to score in the corner for the visitors.

The try was, however, the collective kick up the arse we obviously needed as we began to take control by sending runners up the middle and then actually hitting rucks hard and driving rather than standing off admiringly. This soon resulted in being awarded a penalty on the opposition 22 which we quickly ran wide where our centre Adrian ignored a 4-man overlap and cut inside, and he was a very relieved man when he crashed over to make it 5-5.

So, all square at half-time and things definitely began to look up when the lanky Datchworth fly half (who had a bit of a nightmare afternoon, it must be said) kicked the re-start out on the full, handing us a scrum on half way. The scrum was an area in which we'd had the upper hand all afternoon and it gave us a great platform to launch ourselves down into the opposition 22 where we set up camp and pressurised the Datchworth lineout, with yours truly ending up the beneficiary of their fly half taking an eternity to wind up his clearance kick. The resulting charge down bounced kindly and I collected the ball to stroll over for a try to take us into the lead.

We were definitely on top and the opposition were rattled - so much so that they began to moan and whinge incessantly at the referee for supposed infringements at the breakdown. Admittedly we were no angels but equally there were opposition bodies all over the ball at ruck time and the referee was consistent in his somewhat laissez-faire attitude so I'm not really sure what they were complaining about. Their mood was hardly improved either when, with about 15 minutes to go, I exchanged passes with Ian, our flanker, and took a return pass to dive over unmolested to take the score to 15-5.

The cat was most definitely amongst the pigeons now, as our first victory loomed. A length of the field move almost produced another try before a freak hail storm made life extremely uncomfortable for all concerned - bloody painful I can tell you! Once the weather had abated normal service resumed and we once again worked our way down into the opposition 22. Yet again the Datchworth fly half decided to kick in slow motion and once again he was charged down, this time on his try line by our hooker, Mark, with the ball bouncing kindly for...yes you guessed it...yours truly who duly flopped on the ball in a fit of giggles to complete a somewhat fortunate hat-trick.

The conversion made it 22-5 and not long afterwards the referee blew the final whistle. It was hardly the best quality performance we'd given, but it was enough and a win is, after all, a win.


A strange one to gauge from a personal point of view. My defence was pretty solid but generally I felt I struggled to impose myself and yet bizarrely ended up with 3 tries - the first time that's happened since I was a barnstorming 17 year old openside flanker playing for Peterborough Colts back in the early 80s. My efforts yesterday obviously cost me a jug of bitter and I'm also sporting a decent shiner on my right eye but, believe me, it was all worth it!
Posted by Total Flanker at 16:50

I don't know Flanker, there has to be more than a little skill to create your own luck to score a hat track. Glad you were able to be on a winning side! It makes it that much more sweet, doesn't it?

It looks like your new, raw-meat diet is paying dividends!

Awesome - reading your commentary I almost feel I was there - big congrats on your hat-trick!