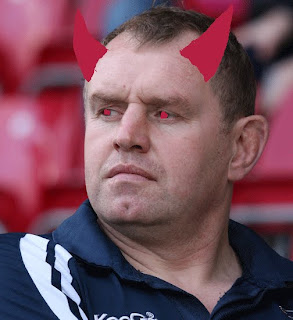 One of the most ridiculous things to emerge from the whole Bloodgate saga so far is the ongoing demonisation of Dean Richards.

It would appear that, despite evidence of widespread skullduggery, all of rugby's ills are the fault of one man and one man only - Big Bad Deano.

Tom Williams was of course an innocent victim in the whole affair, weighed down by a "climate of fear" created by Richards - so innocent in fact that he gave the game away by his pantomime acting and a wink to a team mate and then attempted to blackmail the club in return for his silence. And such was the climate of fear that reportedly 12 Quins players (all forwards apparently) joined Big Bad Deano for a quiet pint last week.

Quins' chairman Charles Jillings, meanwhile, has resigned and apologised - not for attempting to coerce Williams into accepting his 12 month ban, but for the fact the club "failed to control" Dean Richards - the implication being that Big Bad Deano was out of control. This would again suggest that it was Richards and Richards alone who came up with the bold scam and that no one on the management, coaching or support staff either knew about it or was prepared to stand up and say "er, no - that's cheating isn't it?"

We do have the new RFU Task Force, of course, but I won't hold my breath and meanwhile it is ultimately one man (a man who, remember, at least had the guts to resign and take responsibility once the game was up) who is being made to carry the can for the travails of the game as a whole.
Posted by Total Flanker at 09:01 No comments: Links to this post 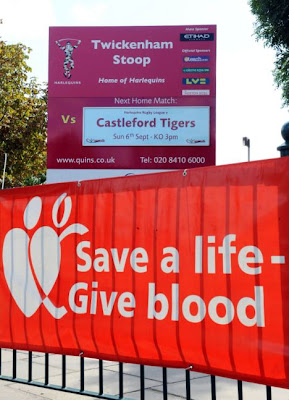 Is it just me, or is there a delicious irony in a certain Lawrence Bruno Nero Dallaglio being named in the 13-man RF

U "Image of Game Task Group" charged with restoring the game's reputation in England?

This is the same LBND, of course, who 10 years ago was found guilty by the RFU of bringing the game into disrepute following his admissions (subsequently denied) to undercover News of the World reporters that he had dealt in drugs, including cocaine and ecstasy.
Short memories, and all that...
Posted by Total Flanker at 18:50 1 comment: Links to this post 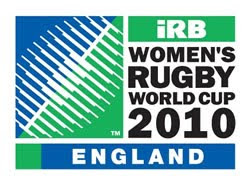 Being on the ball as ever I missed the fact that last week marked the one year countdown to the kick-off of the Women’s Rugby World Cup in England.
Hosts England are ranked second after losing narrowly to the reigning world champions New Zealand in the 2006 Final in Canada. The two sides haven't played each other since then but are about to put things right when the Black Ferns arrive here on tour this November, playing 3 Tests against England on November 14th, 17th (England A) and 21st (the final game being played at Twickenham).
Venues, kick-off times and ticket information for the 2010 Women’s Rugby World Cup have yet to be finalised but the RFUW are busy preparing, recruiting hundreds of volunteers to ensure the event runs smoothly and successfully.

The RFUW are looking for everything from medical assistance to spectator services to liaison officers - anyone interested in helping can find out more and register their interest here.
And I'll wager that their won't be a single fake blood capsule in sight...

Posted by Total Flanker at 10:11 2 comments: Links to this post

The scandal that refuses to die...

The Quins "Bloodgate" saga refuses to go away, and if the latest revelations from the transcript of Tom Williams' evidence to the ERC appeal committee are close to being accurate then the positions of Charles Jillings and Mark Evans, Quins' Chairman and CEO respectively, look to be untenable.

According to Williams he was subjected to inordinate pressure and coercion by Messrs Jillings ands Evans not to reveal the full facts to the appeal committee which, if true, must surely result in their resignations/dismissals. There's even talk of Quins being chucked out of the RFU and the possibility of the club being kicked out of the Heineken Cup this season has re-surfaced.
As things stand it is only big bad Deano that has so far fallen on his sword and I wonder how many other Directors of Rugby in the Premiership are praying that the dust settles quickly.
Posted by Total Flanker at 18:28 1 comment: Links to this post

Raking over the Ashes

Quick couple of words off-topic regarding the recently concluded Ashes series. Obviously delighted with an English victory but more impressed in fact with the muted celebrations and what seems like a determination by the England hierarchy to treat the series win as a beginning rather than as an end - very un-English if recent history is anything to go by.
The fact remains however that I didn't see any of the series live thanks to none of the action being shown live on terrestrial TV - a decision (alongside the frankly vulgar flirtation with Sir Allen Stanford's millions) which I suspect has cost the ECB a golden opportunity to publicise cricket to the nation and which shows them up to be at least as incompetent as the RFU, if not more so.
Posted by Total Flanker at 23:02 No comments: Links to this post 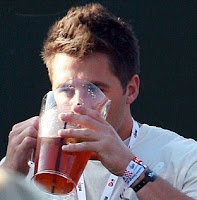 Good to see that Gavin Henson is taking pre-season training seriously!
It looks very much like he's adopting the Total Flanker "Drink Yourself Fit" approach, which is more or less how July and August have progressed for me so far. I have had the excuse of having had a trapped nerve in my neck/shoulder (which no amount of quaffing has shifted) but if I'm honest I have to admit that I've been a complete and utter lazy bar steward.
Still, I now have just over one month until our first fixture (Fullerians away) this season so getting my finger out has to be a priority now...
Posted by Total Flanker at 18:51 1 comment: Links to this post

It seems I can't leave you alone for two weeks without all hell breaking loose.

All I wanted was a quiet couple of weeks away with the family but as soon as my back's turned the world of rugby is rocked by scandal.
I'm referring, of course, to the shenanigans at Harlequins and Bath. For the record, here's my tuppence ha'penny's worth...
For Quins the biggest problem is twofold:
(a) they were caught; and

(b) they attempted to hang Tom Williams out to dry and let him take the rap.
Feigning injury is wrong, without doubt, but it's hardly a new phenomenon in the professional game (witness the number of games that dubiously end up with uncontested scrums, for instance) - fact is though that Quins' attempts were almost comically poor and the person who paid the price should perhaps have been the drama coach rather than Dean Richards who has now been well and truly (and perhaps deservedly) scapegoated.
As for Bath, despite each receiving 9 month bans it seems as if Messrs Lipman, Crockett and Higgins believe that they've been cleared of taking cocaine. Who are they trying to kid? There may have been no direct evidence with which to find them guilty of drug taking but their failure to provide hair samples is damning evidence enough that Matt Stevens and Justin Harrison were by no means alone at the club when it came to indulging in Class A drugs. Frankly they got off lightly.
Meanwhile they're still playing some little tournament down under...
Posted by Total Flanker at 22:53 1 comment: Links to this post

You'll be deighted to note that my drivel will be offline for a couple of weeks as tomorrow I head off on holiday with my family to the island of Lanzarote (aka, somewhat unfairly, Lanzagrotty).

No laptop, no blackberry, no strawberry nor any other soft fruit (I may have used that line before).

I will, however, be taking my kit with me in the hope that I can put in a bit of physical work while out there as so far I have been conspicuous by my absence at pre-season training. I went for a 20 minute run last weekend and it wasn't pretty - desperate times call for desperate measures...

Email ThisBlogThis!Share to TwitterShare to FacebookShare to Pinterest
Labels: holiday 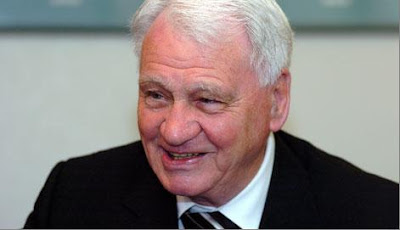