Would you let your kid play rugby? 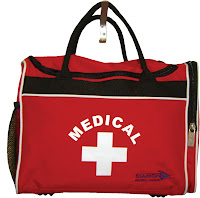 In an article in the Telegraph last week, rugby journalist Mark Reason says that he doesn't want his 10 year old son to take up rugby because "the rugby field has become a far too dangerous place."

His argument is that, because the "big hit" is now king in rugby, injuries are now pretty much inevitable. Whereas the tackle used to be about putting someone on the ground, it is now all about taking him out physically. The tackle has, in reality, been replaced by the collision. Rugby, he says, was always a hard game, but it was never this violent.

To a degree I can see his point. When I started out I was always taught to tackle low, around the legs and, to a large extent, I still utilise this somewhat antiquated practice. There's no doubt, however, that over the years tackles have become higher and higher and now it is perfectly acceptable to smash your shoulder into the opposition player's chest, aided and abetted by the prevalence of padding and protection that was outlawed back in my day.

Mr Reason concedes that rugby is relatively safe up to the age of 15 but beyond that he asks a very pertinent question: "How do you tell a lad who thinks he is immortal that rugby is just not worth getting smashed up for?"

With a 6 year old son who is currently mad about football and Doctor Who (although not necessarily in that order), it isn't a question I have yet had to face. And, if and when I do face it, I can't honestly tell you what my response will be.
Posted by Total Flanker at 17:31 8 comments: Links to this post 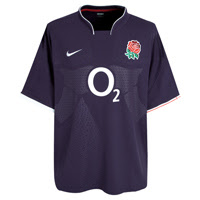 Those attending the England vs Argentina match at Twickenham next month will witness the debut of England's new change kit.
And it's PURPLE!
Setting aside the need for England to wear a change kit against Argentina (they haven't previously, to my knowledge), the RFU would now have us believe that purple is traditional to English rugby, largely because England rugby players were issued with purple tracksuits during that period of uber-cool fashion - the eighties. Nothing at all to do with the fact that the colour might appeal to the ladies then?
The RFU this week also announced record profits of £8.6 million and the old cynic in me queries whether the two stories might somehow be related?
And to cap a week of RFU money-grabbing it has emerged that the chaps at HQ are vehemently opposed to Ofcom's plans to force Sky into sharing out some its premium sports content with other operators because it would affect revenues and prevent the RFU from being able to fund grassroots rugby (yeah, right).
Far be it for me to suggest that, if all rugby ends up on pay-TV, there is unlikely to be any grassroots rugby to support.
Posted by Total Flanker at 16:42 No comments: Links to this post

According to recently sacked Ewen McKenzie, his lack of success at Stade Francais was nothing at all to do with the fact that he is a crap coach, but instead was all the fault of owner Max Guazzini who recruited good-looking players for the club's popular 'Dieux du Stade' calendar rather than for their rugby ability.

All of which will be music to the ears of the motley crew below...

Posted by Total Flanker at 18:46 4 comments: Links to this post

A letter from Graham

Confused about the new All Black coaching structure? Read on to discover the rationale behind the changes...

Dear Steve & Wayne,
I’ve just had a brilliant idea. Seriously.
You know we’ve been a bit below par this season? You may have noticed, eh? If it carries on like this it might get a bit embarrassing when we head to Europe. Well, no worries boys, I’ve got a plan.
Steve – you’ve had 6 years to sort the forwards out, mate. If you look at your contract of employment with the NZRU you’ll see that clause 8.3.2 (c) (vii) requires that you must regularly “make a silk purse out of a sow’s ear.” What happened? Without Hayman we’re just shocking upfront bro. The lineout in particular is stuffed. How hard can it be to chuck the football at the tall bloke in the air?
That’s why I’ve taken the decision to move you to attack coach. There’s heaps of talent still in our backline – I suggest you don’t interfere and just let them get on with it. Don’t stuff it up.
Wayne, mate, for some reason the tries have dried up this season – possibly because you’ve been telling the players to kick the football all over the paddock every time they get it. I know those Northern bastards refuse to play by our rules but can’t we hang on to the ball occasionally? That’s why I’m handing Hansen the job of attack coach. Yes, that’s right, a forwards coach is taking over, that’s how bad it is – his knowledge of kicking is about as extensive as his lineout coaching prowess. Hopefully he can’t do too much damage.
Our defence, on the other hand, is still awesome – no surprises there as that’s my bit. No need to change anything there. Hang on a sec though, with Hansen in charge of attack there’s no one to coach the forwards. I guess I could do that – I mean, how hard can it be? Jump in the lineout, push in the scrum – hardly rocket science. I’m perfect for it.
That leaves defence. I guess you’d better do that Wayne old chum. Try not to stuff it up. Just to tell the boys to keep doing what Uncle Graham’s been telling them and she’ll be right.
Well, there you have it. A masterplan for our assault on Europe this November.
I’m stoked, what could possibly go wrong?
Kind regards,
The Right Reverend Graham Henry

Not my finest hour and a bit 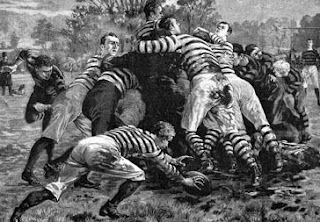 First game of the season yesterday and I played like a drain.

It all looked very promising when I turned up at the clubhouse to learn that Ruislip Vets had cried off and that, instead, we were facing Hammersmith & Fulham VI. I mean, how good could a 6th team be?
We found out soon enough as the opposition sliced through our midfield defence like a red hot knife through liquidised butter to score with the first move of the match. Bugger.
Our cause was not helped by the fact that the opposition had showed up with no front row, leading to uncontested scrums. Picture the scene - 8 gnarled old, large and slow forwards against 8 young fit flankers with no set piece to slow them down. No contest.
Despite the occasional decent passage of play, including a couple of false dawn first half tries, ultimately we were spanked harder than Max Moseley in a dungeon, ending up on the wrong end of a 60-12 hiding.
My own performance was, in a word, pants. I knew it wasn't going to be my day when my old friend sciatica flared up during the warm up and I seriously considered not starting. Further proof, if proof be needed, that warm ups are bad for you.
Against my better judgement, perhaps, I decided to "run it off" but struggled throughout to get up a head of steam. Now I'd be the first to admit that, at my age, I'm hardly the quickest of players, but yesterday I managed to display all the pace of a tectonic shift. I was tempted on more than one occasion to call it a day, but the fact that we were down to 13 men shortly after half time convinced me that I should somehow soldier on. Big mistake as, over 24 hours later, I'm still in agony.
Whereas chronic lower back pain might excuse a certain lack of mobility, nothing can really explain the paucity of the rest of my performance which included some important missed tackles, failing to hang on to possession in contact and one really poor pass that was easily intercepted (although fortunately didn't result in any points against and, equally fortunately, wasn't recorded on video). No, the explanation really is quite simple - I've had no pre-season, I'm not fit enough and I'm bloody rusty. Whisper it quietly but I just might be too old.
On the plus side, that's the first of the season out of the way and surely I can't play as badly again...can I?
Posted by Total Flanker at 18:17 4 comments: Links to this post

A question of judgement

I see that Times' journo Stephen Jones still isn't convinced about the qualities of England skipper Steve Borthwick, claiming this week that the Sarries player wouldn't make his top 6 locks in England.

England manager Martin Johnson, meanwhile, still appears to rate Borthwick highly, both as a player and as a captain.

So the question one has to ask is: Who is the best judge of the qualities required to be an international lock forward?

(a) an opinionated Welsh rugby hack; or

(b) one of the world's best (if not the best) 2nd row forwards and captains ever to play the game?

Simples.
Posted by Total Flanker at 17:05 3 comments: Links to this post

So, Rugby (at least the shortened version of the game) is to become an Olympic Sport in 2016, along with Golf.

I must admit that I've never really been a huge fan of Sevens. I hated playing it as there was nowhere to hide and, for me, watching Sevens has always been more about the beer than what happens on the pitch. On balance, however, I suppose that Olympic status is good news for the game at large.

As for Golf, I really can't fathom how it can be an Olympic sport. Olympic gold is hardly going to be the pinnacle for the likes of Tiger Woods and the proposed format - 72-hole individual stroke play and a field of 60 players with the top 15 world-ranked players automatically eligible (whatever their nationality) - hardly seems to fit the Olympic ideal.

I can't help feeling that the IOC may have missed a trick here. If Golf must be included, why not seize the moment and include Pub Golf instead, providing hope and opportunity for dedicated beer drinkers of all nationalities to come together and compete in quaffing pints (or litres if the Eurpoeans have their way) of ale over an 18-pub course for Olympic glory.

Pub Golf would make for spectacular TV viewing and might even be an event in which Great Britain would excel. And as an exhibition sport at London 2012, it could well turn out to be the focal point for the Games.

Or, failing that, why not Spoof?

Posted by Total Flanker at 12:23 3 comments: Links to this post

36 is, it turns out, the nickname given by Leicester Tigers' skipper Geordan Murphy to new recruit Billy Twelvetrees.
Why 36?

Because, if you say it in Murphy's Irish accent, "twelve t'rees" = 36.
Genius! Up there with John "Nobody" Eales (as in "Nobody's Perfect")
Posted by Total Flanker at 18:56 2 comments: Links to this post

Amongst the news recently has been:

Another issue to come out of the Task Force report is the issue of rolling substitutions. Now I know that there are many who believe that rolling substitutions will lead to the advent of specialist kickers being brought on just to take kicks and behemoth props being developed to bring on tactically at opportune moments, but to be honest I can't see much of an alternative for the professional game. As things stand the rules surrounding blood replacements are way too complex and, despite the efforts of the authorities, are still open to abuse. Removing the temptation to cheat by allowing rolling substitutions - albeit with certain safeguards such as limiting the number of substitutions allowed in a game - therefore has a certain logic.

Posted by Total Flanker at 18:39 2 comments: Links to this post