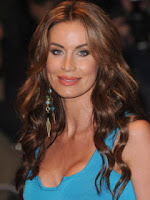 Being firmly of the opinion that his players should spend as much time as possible in the celebrity spotlight, Martin Johnson would no doubt have been delighted to learn that Saturday's man-of-the-match James "Le Hask" Haskell is, according to that scurrilous tabloid the Daily Telegraph, now "courting" Jo-Emma Larvin, ex-girlfriend of Welsh boxing legend Joe Calzaghe.

Miss Larvin is, according to her agent's website, a former glamour model who has since turned her talents to TV presenting (as Jim Davidson's glamorous assistant on The Generation Game) and acting, where her mastery of the renowned "Meisner Technique" bagged her the lead female role in a McFly music video. In other words she makes Kelly Brook look like A list.
Total Flanker...bringing you the stories that matter.
Posted by Total Flanker at 18:38

And with Rob Kearney dating Susie Amy it seems the latest accessory for a budding star is to land a big name player. Or is the rugby boys who are keen to ruck any minor celeb?

Hate to show my ignorance here but Susie who?

She starred in the TV show "Footballers' Wives" a few years ago. Now don't tell me you missed it, Flanker...

Have a look here if you really want to find out more:

I've just discovered what WAGS mean in English... please keep it to football only :-)