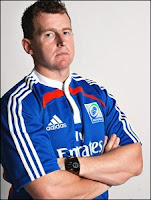 Despite an outraged response from the likes of The Independent and gay rights rent-a-quote Peter Tatchell, Thomas's "homophobic outburst" was in fact no more than a schoolboy joke.

In response to Opsreys team mate Ian Evans tweeting "Legs and ass are in bits, can't move," Thomas is reported to have replied "U gotta stop hanging round with Nigel Owens!"

Being possessed of a somewhat puerile sense of humour myself I actually thought that the tweet was quite funny but it was clearly all too much for the PC brigade.

The Independent referred to the tweet as "offensive" whilst Tatchell called it "unacceptable".

Thankfully common sense has been added to the equation by Owens who referred to the matter as being "just banter."

"I have no issues with people pulling my leg like that," said Owens, "it's been taken totally out of context, I think people are sometimes losing their sense of humour."

Good for you Nigel.
Posted by Total Flanker at 18:39