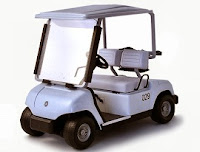 After a difficult year, I see Andy Powell has been released by Cardiff Blues after “losing his way.”

Powell, evidence in support of the theory that evolution can indeed go backwards, has in recent weeks been linked with moves to the T14 in France and Rugby League in Wrexham. It appears, however, that he and his golf buggy will soon be rolling along the M40 towards High Wycombe and a place at the Buckinghamshire Home for Rugby Waifs and Strays.

I suspect Cardiff’s loss may be Wasps’ gain.
Posted by Total Flanker at 21:53