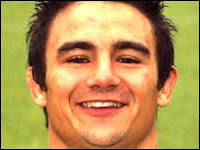 I was disappointed to read the news this week that Harry Ellis, the former Leicester, England and Lions scrum-half had been forced to quit the game following a succession of knee injuries. I rated Ellis highly (I'm sure he'll be delighted to hear it). Until the very recent emergence of Ben Youngs, Ellis has been England's best scrum half by a mile in the last few years and, at only 29, he would almost certainly have been at next year's World Cup but for injury and would definitely have strengthened England's resources.

Ellis' retirement comes hot on the heels of two others - Michael Owen, also 29, who captained Wales to their 2005 Grand Slam has also had to call it a day after long term knee problems, whilst the very unfortunate Thom Evans has been forced to pack it in after sustaining a serious neck injury whilst playing for Scotland against Wales in this season's Six Nations. At only 25, the super-charged Evans appeared to have a glittering rugby career ahead of him.

I guess the issue here is what will they all do next? Not everyone is cut out for coaching and players simply don't earn enough from rugby to be able to put their feet up when they retire (unlike their football equivalents). The requirement for planning for a career beyond rugby is therefore ever more important.
Posted by Total Flanker at 09:22