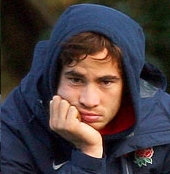 Having slotted 5 conversions in Melbourne Rebels' 54-0 demolition of Tonga it would be nice to think that Danny Cipriani is finally just letting his rugby do the talking.

His recent revelations, however, that he has undergone counselling for depression suggest otherwise. On the one hand you might think that such a high profile figure admitting such frailty is laudable. On the other hand it again appears evident that Cipriani still feels the need to lead his life under the public gaze which is somewhat ironic given that, almost in the same breath, Cipriani insists he is in Australia to play rugby and lead a quiet life.

Rebels coach Rod MacQueen blames a media obsession with the former Wasps no 10, complaining that "it’s very difficult when we're building a new team and we're always hearing about Danny. It's disappointing for him but that's one of the reasons he's come over here, to get a fresh start."

Whilst the paparazzi aren't exactly blameless, Cipriani hardly helps himself, recently escorting former Neighbours star Stephanie McIntosh to a club function whilst having also been linked with Australian X Factor contestant Tamara Jaber since moving down under. Far be it for me to suggest, but the last time I looked it wasn't compulsory for rugby players to date celebrities (no matter how minor).

The shame of it all is that if he does focus on his rugby there is a huge opportunity in Melbourne for him to develop into a seriously world class player. He has natural talent in abundance and the Super 14 (or 15 or whatever it is these days) may just be the making of him.

Sadly, however, I fear it may all end in tears.
Posted by Total Flanker at 11:04 2 comments: Links to this post

Welcome news last week that Maidstone RFC have been docked 50 points at an RFU hearing in the wake of the Clarence Harding eye-gouging incident.

Although the club were also fined a fairly paltry £2,000, the points deduction - which means that Maidstone now  face certain relegation from London 2 South East  - is at least a statement of intent that gouging will not be tolerated.

Some might say that punishing the club for the actions of one unidentified player is somehwat draconian.

I think not. Maidstone had their chance to identify the guilty party and chose not to. End of story.
Posted by Total Flanker at 18:00 6 comments: Links to this post 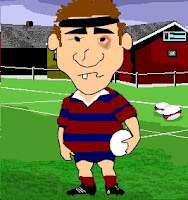 It is with some surprise that I realise that it’s some 14 months since I last took to the rugby field in anger. Until a few weeks ago that was still more recently than a certain Welsh tangerine-man but now I’m very much out on my own in my rugby isolation. I do, however, have several well rehearsed excuses, including (without limitation):

1. Lack of Fitness - any gains made during last summer’s touch rugby have slowly but surely ebbed away during the autumn and winter. I have all the strength of a malnourished gnat, all the stamina of an asthmatic mayfly and all the muscle definition of strawberry jelly. Frankly I wouldn't last 5 minutes on a rugby pitch at the moment.

3. Weekend distractions - my 8 year old boy's footballing commitments mean that Saturday and Sunday mornings are largely both taken up driving him to various parts of Watford and Hemel and giving vociferous non-expert "advice" from the touchline, leaving precious little time for much else.

4. No Vets - my club hasn't been putting out a Vets team this season so the incentive to get myself fit and make myself available just hasn't been there. Running around with a bunch of teens in the 3rd XV doesn't have the same appeal somehow. Feeble excuse I know but I'm grasping at straws now.

5. Reality - much like my orange-skinned role model from the Valleys, I really do need to keep my weekends free for offers to take part in reality telly programmes such as Strictly Celebrity Big Brother Get Me Out of Here On Ice.

6. Laziness - the painful truth of it all is that, deep down, I'm a lazy bar steward.

All is not, however, lost. I do have a plan of sorts:

Wake up Maggie I think I've got something to say to you...

HUGE congratulations to England Women's flanker Maggie Alphonsi who earlier this week was announced as the winner of the the prestigious Pat Marshall Award at the Rugby Writers’ Dinner, beating off the challenge of the likes of Richie McCaw and Victor Matfield. 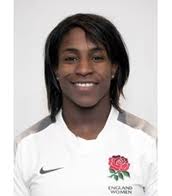 The award was given in recognition of her immense efforts during the Women's Rugby Cup at the beginning of the season as well as for her years of dedicated service to the sport.

Alphonsi (who also snapped up the 2010 Sunday Times Sportswoman of the Year gong), joins luminaries such as Gareth Edwards, JPR Williams, Jean-Pierre Rives, David Campese and Jonah Lomu as recipients of the award.

Quite remarkable and thoroughly deserved.
Posted by Total Flanker at 20:49 No comments: Links to this post 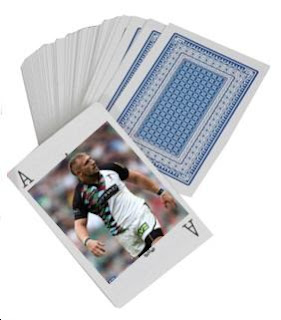 The names announced this week in the England EPS for the 6 Nations were predictable enough. In some circumstances that might be quite comforting (the 2003 squad more or less picked itself for instance) but not, I'd suggest, under present circumstances.

The summer tour to Oz and the November internationals showed that currently the key players for England are, in no particular order, Lewis Moody, Dan Cole, Courtney Lawes, Tom Croft, Nick Easter, Ben Youngs, Toby Flood, Chris Ashton and Ben Foden (and of those key players, 2 are currently crocked).

Everyone else in the squad of 33 are, I would argue, no more than squad “fillers” falling into 1 of 3 categories:

1. honest and reliable plodders who will never be key players but won't let you down;

2. players with real potential to be key players for the future; and

3. players who will never be key players and who rarely perform.

In an ideal world there should be no players from category 3 and a healthy balance between the first 2 categories, with the balance probably favouring the players with potential. Despite, however, the emergence of some major talent in the England ranks in the last 12 months we still find ourselves with a number of players in the squad of whom you have to ask:

“Does his presence in the squad make victory in the next game more likely?”

And, unless the answer to this question is a resounding “YES” the next question has to be:

All of which brings me to the most important question:

“Are there any players not in the squad who, if added to the squad, would make victory in the next game no less likely but who have the potential to make England a much better team at the World Cup?”

“Who are the wildcards?”

Ladies and gentlemen, for no reason other than my own self-indulgence I give you three names:

Posted by Total Flanker at 19:00 2 comments: Links to this post

It would appear that England now have two hopes of winning the Six Nations this year...

Following the autumn series, and despite what effectively were two stuffings by New Zealand and South Africa, I thought I detected sufficient promise in the overall England performances to be quietly confident that 2011 might be England's year. Unfortunately, however, injuries to Tom Croft and Courtney Lawes have holed such confidence below the waterline.

Martin Johnson's mission, should he choose to accept it, is to find replacement forwards with the same mix of athleticism and dynamism that Croft and Lawes bring to the party. Sadly, as today's announcement of the England Six Nations squad amply demonstrates, I fear that this will prove to be Mission Impossible.
Posted by Total Flanker at 18:27 2 comments: Links to this post

Much is being made of the scrapping of Rob Andrew’s role at Twickenham following new RFU CEO John Steele’s strategic review this week. Looking at the nation’s message boards it looks as if  “good riddance” and "it’s about time” are the prevailing sentiments being expressed by England rugby fans.

This is not a view I share. Firstly I should declare my hand by saying that I knew, and indeed played rugby with, Mr Andrew at university. I am therefore suitably biased.

I do, however, find it strange that there appear to be many who are happy to lay the blame for all of England rugby’s woes since 2003 squarely at Andrew's door. This ignores the following inconvenient facts:

- he was not appointed to his role as Director of Elite Rugby until 2006 and therefore inherited the RFU's failure to plan beyond 2003;

- other than during the ill-fated New Zealand tour in 2008 he hasn't been picking or coaching the England team;

- he was instrumental in negotiating the Elite Player Agreement with the leading English clubs, ending years of club vs country bickering and providing England’s management with unprecedented access to and control over players; and

- he has overseen a resurgence in England age group rugby, with the Under 18s and Under 20s now flying and with several younger players now coming through into the senior ranks.

Arguably the all-encompassing remit of Andrew's original role has perhaps been too wide (was it strictly necessary for the England head coach to report to him, for instance?) and yes, England’s senior squad has taken a frustratingly long time to show signs that it might compete on the world stage again. To ignore Andrew's other achievements in his role, however, seems churlish and the fact that he has been invited to apply for the new role of Operations Director may well now enable him to play to his strengths.

What does seem a little odd is the creation of a new Performance Director role, a position to which Martin Johnson will have to report. By all means have a Performance Director, but I would have thought giving Johnno direct access to a rugby-oriented CEO like Steele would make far more sense.
Posted by Total Flanker at 21:09 No comments: Links to this post