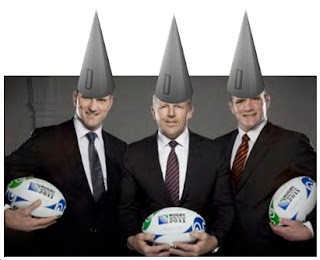 Time to revive the long lost and mostly forgotten DUNDERHEAD OF THE WEEK award (last seen in the possession of former Scotland coach Matt Williams in November 2007).

With the first weekend's action over, the award goes to the entire ITV commentary team, every last one of them. Whether it was Steve Ryder desperately trying to remember how to be a sports presenter, or Craig Doyle taking time off from his double glazing adverts, or Girvan Dempsey looking like a bemused auditor, or Phil Vickery's West Country monotone, or Dallaglio and Pienaar utterly failing to get to grips with a hi-tec touch screen that patently did not work, or the cliché-ridden commentaries - if I didn't know better I would assume that this was some kind of fiendishly clever self-parody.


ITV's problem (also shared by Channel 4 when covering the World Athletics Championship)  is that, other than football, they really have no experience or pedigree in presenting a sports programme - as the channel ably demonstrates every 4 years at the Rugby World Cup.

So, congratulations ITV - the first DUNDERHEAD OF THE WEEK award this RWC is all yours.

On the bright side, at least Jim Rosenthal is no longer presenting.
Posted by Total Flanker at 20:34