The Total Flanker Guide to: the Rugby World Cup Final 2011 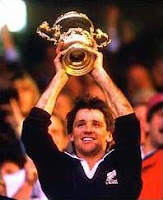 How does one preview a foregone conclusion?

Because a foregone conclusion is surely what Sunday’s Rugby World Cup Final is. The impression I get from what I read and from what I hear is that the world expects N to stroll to victory on Sunday. And quite right too, based on what has gone before.

There is always the possibility that might be able to dredge up a performance from somewhere. But from where? In the pool games they summoned up 10 minutes against , maybe 15 minutes against each of and and nothing at all against . They then impressed for 20 minutes in the quarter final against but followed that by more or less refusing to play any rugby against in the semi final. So that’s a total of around 60 minutes half-decent rugby at this tournament which, even were they to reproduce this on Sunday, would still  be nowhere near enough.

There is also the possibility of an All Black choke, but I wouldn’t count on it. If the choke was going to happen anywhere it would have occurred against last week when the tension dial was turned up to 11. I sense that reaching the final has considerably eased the pressure on the team. Might this be counter-productive and lead to complacency? I suspect not.

From a neutral’s perspective I hope that produce that elusive performance out of nowhere and make a real game of it. There have only been 2 finals in Rugby World Cup history where the result has not been close – 1987 and 1999 – and both times it was the French who finished as heavily beaten runners-up. Who knows whether or not this French team can reverse that trend? I hope so. If N are to be crowned champions, as we all expect, let’s hope at least that they are made to work for it.
Posted by Total Flanker at 19:25

The two cliches seem to have been proven wrong in this World Cup. 1) You never know which France will turn up. 2) France always have one good game in them.

Well it seems now there is only one France and my God they are poor.

Prior to this World Cup I supported France a great deal, because I studied there and have a lot of good memories of my time there. Between this coach and the their play, I just cannot bring myself to root for them against the All Blacks. To me, given everything that has happened there in the past year, I think an All Black win would be a great shot in the arm to the Kiwi Pysche. I also found them to be absolutely the most wonderful hosts imaginable during my almost 2 weeks in NZ.