What goes on tour...

End of tour report in under 140 characters for each of England, Wales, Ireland and Scotland:

England - Plenty of positives to take home but lack of fluency in attack and failure to register win against under-strength Boks disappointing.

Wales - Close but no cigar, once again. Bad luck or maybe not quite as good as they believe they are? I suspect the latter.

Ireland - Not many positives after 60 point spanking. Whisper it very quietly, but should BOD be calling time on illustrious international career?

Scotland - Churlish to suggest that victory over Fiji, Samoa and under-cooked Australia in the rain is nothing to write home about, so I won't!
Posted by Total Flanker at 19:16 1 comment: Links to this post 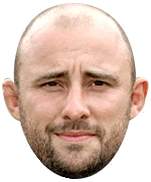 Something that I inexplicably forgot to remark upon recently was the retirement through injury of erstwhile Bath and England prop David Flatman.

Not only was Flatman a fine loosehead and, in this blog’s humble opinion, worthy of far more than the 8 caps he collected for England, over the last few years he has also written a thoroughly witty and eloquent column for the Independent.

His latest offering – dealing with his retirement – is nothing short of a masterpiece. I urge you to read it – it sums up our sport quite wonderfully and is an article I really wish I could have written.

I truly hope that Flats continues to regale us with his insight and humour in the years to come and if there’s ever a book then I’ll be first in the queue.
Posted by Total Flanker at 00:05 1 comment: Links to this post 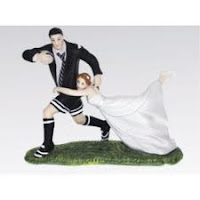 Francois Steyn is unavailable for this weekend’s 3rd Test against England because he is getting married.

What on earth was he thinking?

It is well established that all rugby players, even grassroots amateurs, know that you do not arrange a wedding during the rugby season. And if, by some strange quirk of fate, you do have to get married during the season (shotgun wedding etc), you damn well make sure the wedding is in the morning so that you’re available to play in the afternoon - it's hardly rocket science.

Meanwhile John Barclay has flown home ahead of Scotland’s match against Samoa in order to “prepare for his wedding” which is a week later.

Prepare? What? Has the world gone completely mad?

Posted by Total Flanker at 18:25 4 comments: Links to this post

Whatever happened to: Rugby Club Names?

The introduction of a new Italian-based team, ‘Zebre’, into the Rabid Pro-12 Celtic League (or whatever it’s known as these days) has got me thinking.

Although I have not travelled widely in Italy, as far as I know the fields outside Parma aren’t exactly overrun with herds of meandering stripey horses.

Which brings me to my latest gripe about stuff that’s gone AWOL from rugby over the years – I am talking, of course, of the demise of traditional (or “proper”) rugby club names.

For instance, and using the English Premiership as an example, how many Sharks have been spotted in the Sale area, how many Chiefs do you see wandering the streets of Exeter and is Worcester really festooned with Warriors?

And, while the nicknames of Leicester (Tigers) and Northamption (Saints) do date back to the 1880s, was it really necessary for such nicknames to be incorporated into their respective names and, in Leicester’s case, their new abomination of a kit?

It’s even worse in the Southern Hemisphere of course where, for the uninitiated, it must be nigh on impossible to work out from where each team hails. Stormers v Force? Crusaders v Rebels? Sharks v Hurricanes? Really?

And as for the England SAXONS – I can’t even begin to describe my contempt.

I realise, of course, that’s it’s all about money, but to me it’s all somewhat misguided and smacks of the insecurity of a still fledgling professional sport attempting to ape a model developed in North America rather than having the confidence to rely on its own rich history.

Sadly it appears that the die is cast and nothing is likely to change. I cling on, however, to the hope that the die hard clubs currently hanging on to their history and identity – the likes of Bath and Gloucester for instance – will continue to do so and not be tempted to add some meaningless sobriquet in an attempt to sell more merchandising tat.

Posted by Total Flanker at 23:05 6 comments: Links to this post

Email ThisBlogThis!Share to TwitterShare to FacebookShare to Pinterest
Labels: names, rugby, rugby clubs, Whatever happened to?

With the natural order of things restored in the southern hemisphere at the weekend after the Scots had upset the applecart last week (own up, who saw that one coming?), it’s time to focus once more on weightier (literally in my case) matters – i.e. the progress of the Bridesmaids touch team.

Having seen off the challenges of Chairman’s Choice and the Leprechauns over the past 2 weeks, we had reached the half-way point of the season in the box seat and last night we maintained our unbeaten record with our best performance so far – a 17-4 victory over the enigmatic Spy Rugby.

Furthermore – hold the front page – Total Flanker managed to cross the whitewash (or bluewash, to be precise) for the first time this season (or, more accurately, followed the dummy half over the line to take a scoring pass from minus one metres – a distance from which I’m deadly).

The try capped a performance in which I was far more involved from an attacking perspective than in previous weeks – a product of, I hope, improved fitness – although my efforts paled into insignificance compared to the performances of our young lads yesterday – Tommy, Richard, Alfie and Billy – who were all outstanding.

I suspect, however, that our frolicking around scoring tries for fun will be short lived – it’s a rest week next week followed by our return encounter with those BaaBaas from Watford. They’ll be itching for revenge after our 4-2 victory over them a few weeks back and I’m guessing it’s going to require a backs-to-the-wall defensive effort once again. Can’t wait!
Posted by Total Flanker at 19:34 No comments: Links to this post 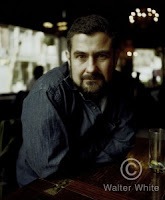 I received some awfully sad news last week that a university contemporary of mine, Paul Sussman, had passed away, aged just 45, after suffering a ruptured aneurysm.

Paul was one of life's originals. Two years below me, I recall him turning up in college in his first year - a dishevelled character in a dodgy jacket and sporting an even dodgier moustache. From day one he stood out as a genuine eccentric and soon won people over with his charm and ready wit. Moreover, despite a physique that no one would describe as athletic, he soon became a key member of the college 3rd XV (as much for his social capabilities as for his rugby prowess) and, astonishingly, went on to box for the university 2 years later.

That was the thing about Suss - it seemed he could turn his hand to pretty much anything and, until his death last week, I had no idea he had gone on to be such a success as a journalist and novelist.

I can't pretend that Suss was a close friend, but you couldn't help but warm to the bloke and when living in London I'd run into him from time to time at parties and other social gatherings. On one such occasion I recall getting together with a group of old college mates in a pub where Paul - clearly short of funds at the time - would get his round in by reaching under the table into a carrier bag stuffed with cheap lager!

The last time I saw Paul was, ironically, a few years ago at another college mate's funeral. It just doesn't seem right that such good guys should be taken so young.

RIP Suss - my thoughts are with you and your young family.
Posted by Total Flanker at 11:44 No comments: Links to this post

How (not) to celebrate

A little on the late side but...

...is the announcement of the appointment of Bryan Redpath as Director of Rugby at Sale Sharks.

Redpath, you will recall, resigned his position as head coach at Gloucester with 2 games left to play last season, with poor results cited as the reason behind his departure. Entirely coincidentally, a few days earlier Sale's CEO Steve Diamond had stated that all interviews for the position of Director of Rugby at Sale had been concluded and that an announcement would follow.

Sale Sharks, of course, insist that Redpath's resignation was nothing to do with them.

...continues to linger around the corridors of HQ in the form of threatened legal proceedings from former RFU Chairman, Martyn Thomas.

Thomas has apparently indicated that he plans to serve the RFU with a writ for defamation relating to the publication of the Blackett Report into the controversial departure of John Steele as CEO last year (crikey, was it only last year?)

For the uninitiated, the Blackett Report was commissioned by Martyn Thomas and his Management Board to investigate the circumstances in which Steele failed to secure the services of Clive Woodward as RFU Performance Director, for which he was effectively sacked last June. Unfortunately for the Management Board, rather than condemn Steele's actions (as they had anticipated), Judge Jeff Blackett instead recommended that Martyn Thomas and nine other non-executive directors on the Management Board should resign. As far as I am aware no Management Board member actually resigned while Thomas eventually had to be more or less dragged kicking and screaming from the building.

So, having escaped misconduct charges at the end of last year, it appears that Thomas is now after his pound of flesh and, perversely enough, this may be exactly what is needed - a chance to lay this whole sorry mess to rest.
Posted by Total Flanker at 21:08 1 comment: Links to this post

Andy Farrell's decision to quit as head coach of Saracens was something of a bolt from the blue.

Having rejected the chance to join the England coaching set-up full time in April out of apparent loyalty to his club what, pray, has prompted the U-turn?


- a simple change of mind? Unlikey.

- the lure of filthy lucre? Possible.

- a bust up with someone at Sarries? I wonder.

Answers on the back of a postcard, all rumours gratefully received.
Posted by Total Flanker at 18:02 1 comment: Links to this post