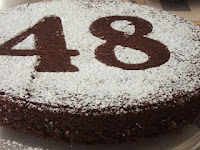 48 years young today and where did I celebrate? At Bishopswood Hospital, seeing an orthopaedic consultant about my increasingly sore and immobile left shoulder.
The verdict? Frozen shoulder - "a chronic fibrosing condition in which the fibroblast cells become overactive and lay down abnormally thick layers of collagen causing a marked thickening of the shoulder joint capsule." Apparently.

Options? Continued physio and painkillers in the hope that it goes away, failing which I may have to go under the knife. Happy Birthday to me.

It’s almost certainly yet another sign of me getting on a bit – and I’ve just realised where I went wrong. Unlike All Black captain St. Richie of McCaw, I was never granted a season-long sabbatical (a rest period he apparently needs to have any chance of playing in the 2015 RWC).

Personally I remain unconvinced that St. Richie's plan will work – after all, arguably I did manage a 14-season sabbatical between 1994 and 2007 and yet have never featured in a World Cup....go figure.

Posted by Total Flanker at 19:28 6 comments: Links to this post

I had to smirk at the news that Bath fly-half Olly Barkley is joining Racing Metro 92 in Paris at the end of the month.

Barkley has spent his entire career at the Rec apart from one season. That one season was at Gloucester, a 50 mile move up the M5, where he failed to settle.

What could possibly go wrong?
Posted by Total Flanker at 11:25 No comments: Links to this post

And so the wait is over. That famous old British manufacturer, Canterbury of New Zealand, has (following a teaser campaign that had us on the edge of our seats in anticipation) finally revealed its revolutionary new kit design for the England rugby team. 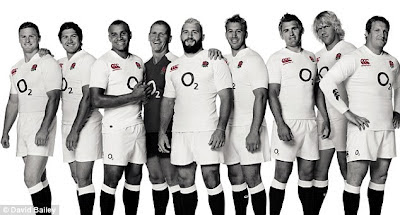 And the verdict? Pleasantly surprised – at least as far as the home kit goes. After all, you can’t go too far wrong with a traditional white shirt, white shorts and navy (or "midnight blue") socks. As ever, I’d have liked a collar but you can’t have everything.

There is, of course, the usual gimmicky nonsense, with the slogan ENGLANDCONNECTED - which "acts as a reminder of the rugby family" - apparently embroidered on the inside of the sleeve.

And no England kit announcement would be complete without the expected ridiculous away kit (this time in a colour that won't show the red wine stains from post-match festivities - somewhat ironically modelled by Danny Care). Officially it's "regal purple" - which according to the RFU "reinforces England's position as a member of rugby royalty". Good grief.

All in all, however, I’d say we’ve dodged a bullet on this one.
Posted by Total Flanker at 18:24 2 comments: Links to this post

A bit late in noticing this one, but I was sorry to see that, after 5 years, Lee over at Blood & Mud has decided to call it quits and close his excellent blog.

Entertaining, witty and informative is a difficult combination to pull off (I should know - I’ve been trying and failing for some time now) but Blood & Mud managed it with enviable regularity. I fully understand how pressures on time can lead to dwindling output but it’s a shame nevertheless and Lee’s unique contribution to the rugby blogosphere will definitely be missed.

Posted by Total Flanker at 17:38 2 comments: Links to this post

It seems Chris Ashton will not suffer any disciplinary action, from either Saracens or England, following his nightclub altercation on Saturday night. Quite right too, given that on the face of it he was the victim of some have-a-go moron who attempted to headbutt and then glass him.

I do wonder, however, why the penny hasn’t dropped for many professional rugby players. I know this will sound incredibly old fogeyish, but it can hardly come as a surprise to learn that nightclubs on a Saturday night often = trouble. Take a look inside any A & E department on a Saturday night for ample evidence.

Staying out of trouble really isn’t that difficult.
Posted by Total Flanker at 23:12 1 comment: Links to this post

Terribly sad news about the death of young Ulster centre Nevin Spence, together with his brother and father, in an accident on the family’s farm on Saturday evening.


Not much else I can say really – RIP.

Following the superb and memorable Olympic and Paralympic Games we have a wonderful opportunity, with the Rugby World Cup in England in 2015, to stage another truly world-class sporting event.

A great start has been made with Debbie Jevans, the highly respected director of sport at the Olympics, being appointed as CEO of England Rugby 2015 and with the prospect of rugby being played in the Olympic stadium.

I must say I’m intrigued by the possibility that the Olympic stadium might be used for the Rugby World Cup. I’ve been to the stadium twice in recent weeks and it’s superb – for athletics. Whether it can be modified to accommodate a rugby audience successfully and still be used for major athletics events in the future (which really should be the stadium's legacy), however, remains to be seen.

I really hope so because it’s a fantastic venue in a fantastic position – the Olympic Park is an ideal place for international fans to meet and mingle and it’s far better positioned than Twickenham, for instance, to bring top class rugby to London.
Posted by Total Flanker at 23:30 No comments: Links to this post

Wow. Premiership Rugby’s exclusive £152 million 4 year deal with BT looks like being a bit of a game changer.

Not only will English clubs now be rolling in cash (and I wonder how long the salary cap will now last), the fact that the new BT deal will incorporate exclusive rights to European games from 2014 means that the clubs can now call all the shots. ERC may be upset but ultimately money talks – put simply Europe needs the English clubs more than the English clubs need Europe.

Of course, with money come money-related problems. No doubt players will expect a significant hike in salaries – as if we didn’t already have enough mercenaries in the game – and if we’re not careful rugby will become so reliant on TV money that the sport would simply collapse without it (although to be fair we may already have passed that point some time ago).

As for the humble rugby consumer, he/she is now expected to fork out yet another monthly fee to yet another TV supplier. I don’t suppose the suits at Premiership Rugby give a rat’s arse but they really should – there’s a limit to how much they can expect us to spend to watch what has often been, let’s be honest, a fairly mediocre product.

Posted by Total Flanker at 22:39 5 comments: Links to this post

I also can't say I'm hugely impressed by the somewhat gutless announcement that the RFU has apologised to former chairman Martyn Thomas for the comments made against him in last year's controversial Blackett Report.

The original report, commissioned by Thomas and his Management Board, concluded that Thomas and nine other non-executive directors on the Management Board should resign, having taken evidence from 65 witnesses on a confidential basis. A subsequent report, led by Charles Flint QC, then concluded that there was no “solid evidence” against Thomas (hardly surprising given that it was collected confidentially) since when the RFU has been under threat of a defamation writ from their former chairman.

This week’s announcement seemingly brings an end to this pathetic, laughable saga. The RFU may be gutless but at least it seems it's finally all over.

Posted by Total Flanker at 21:24 No comments: Links to this post

Can't say I'm massively happy with the appointment of Warren Gatland as Lions head coach for the 2013 tour to Australia.

There's no doubt he's a good coach and was clearly favourite for the role, but there's something that sticks in the throat about having to have a Kiwi lead a Lions tour.

I don't think of myself as a xenophobe, but the Lions job really should be the ultimate ambition for any coach on these islands whereas Wazza's ultimate ambitions undoubtedly lie elsewhere, as did those of the Right Reverend Graham Henry before him.

By appointing Gatland I can't help feeling that we are effectively helping him enhance his knowledge and experience for the day he takes over the main job in the Land of the Long White Cloud which, frankly, is the last thing we should be doing.
Posted by Total Flanker at 19:13 6 comments: Links to this post