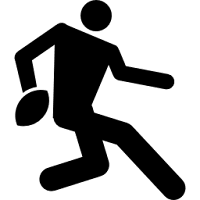 Back into the Chesham Touch Premiership yesterday evening with Dave's Dad's Dog's Dead.

Last year's record of played 10, won 10, with 130 tries scored (to which yours truly contributed precisely 1 (ONE) try) will take some beating, but we started off with a 9-7 victory last night in a fast and frenetic game.

And I feel ridiculously sore for someone whose contribution to the game, it has to be said, was entirely negligible. From a personal perspective it can only get better...
Posted by Total Flanker at 22:35