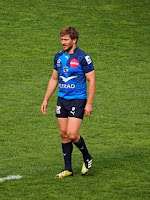 Massivley unimpressed by Montpellier’s Francois Steyn who yelled "MISS" when trying to charge down a conversion attempt by Northampton’s Stephen Myler during their match on Saturday.

Myler did miss, but referee Nigel Owens quite rightly ordered the kick to be taken again and Myler converted.

Steyn received a ticking off from Owens but, quite frankly, a yellow card would not have been unjustified.

That Northampton went on to win the match by 2 points is justice of sorts.
Posted by TotalFlanker at 22:15

Once saw the whole team charging a conversion shouting & screaming. Ref allowed the conversion re-take, and then gave penalty from the same spot.