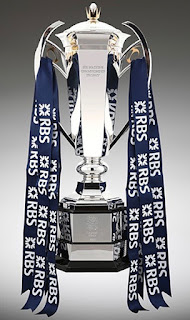 So here it is, the moment you've all been waiting for, my CHAMPS & CHUMPS of the Six Nations 2017.

15. Stuart Hogg - defence still iffy,  but his attacking repertoire is quite extraordinary.
14. Tommy Seymour - Lions 14 shirt starting to look a great fit.
13. Garry Ringrose - whisper it quietly, the heir apparent to BOD?
12. Owen Farrell - another certain Lions starter.
11. Elliott Daly - has everything and a move to fullback must be on the cards.
10. Finn Russell - indifferent at Twickenham but otherwise excellence personified.
9. Rhys Webb - a bit of a gobshite but was Wales' best player throughout.
1. Cyril Baille - key element to a hugely effective French front row.
2. Ken Owens - nuggety and consistent.
3. Tadhg Furlong - gargantuan - where did the Irish find this guy?
4. Joe Launchbury - the relentless excellence throughout that we've come to expect.
5. Courtney Lawes - a player re-born, grafted hard and is no longer just seeking the big glory hit.
6. CJ Stander - strength of a bull, heart of a Lion.
7. Kevin Gourdon - proper ball-playing openside in the tradition of Jean-Pierre Rives.
8. Louis Picamoles - simply unstoppable.

And so to the CHUMPS. In fairness, a true reflection of this year’s championship would probably be just to select 15 Italians, with the 2017 Azzurri so far off the pace and even the great Sergio Parisse seemingly incapable of staying competitive beyond 60 minutes. However, in order to spread the love I've tried to as even-handed as possible...😀

15. Mike Brown - can't pass, won't pass and opposition defences are finding him increasingly easy to read. Time for a change at 15 Eddie.
14. Alex Cuthbert - Rob Howley picking him against England was arguably more cruel than me listing him here.
13. Jonathan Davies - and not just for his howler against England, he was part of a Welsh three-quarter line that would struggle to pass the parcel.
12. Luke MacLean - no idea what he or the Italian backline were attempting to achieve.
11. Giovanbattista Venditti - to call him a donkey would be unfair on donkeys.
10. George Ford - much to admire about Ford but he again wilted under pressure and defensively his channel remains extremely vulnerable.
9. Ben Youngs - very, very quiet championship, way too quiet for such an experienced number 9.
1. Alan Dell - key component of a struggling Scottish front row.
2. Fraser Brown - ditto, and in addition let down his team badly at Twickenham when yellow-carded early doors.
3. Uini Atonio - "Are you injured?" "I'm ok...er...I mean...my back's a bit sore...er...I mean...my head?"
4. Jake Ball - huge amount of effort. No end product.
5. Devin Toner - noticeable how much more dynamic the Irish pack were in his absence.
6. John Barclay - lost the plot at Twickenham badly.
7. Tom Wood - little impact whether a starter or a finisher.
8. Sergio Parisse - at times looked like he'd simply had enough, and who can blame him?