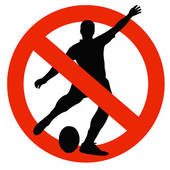 Here's something to get your blood boiling...

Torbay Council has recently changed its mind about allowing Paignton Rugby Club Under 9s and Under 10s to play rugby at Torbay Park in Paignton.

Apparently the pitches had been marked out and the Council had accepted payment before making an abrupt U-turn following complaints from the certain members of the public about increased noise.

Quite rightly there is a Change.org petition in place to get the Council to reverse this idiotic decision, currently running at 6,000+ signatures.