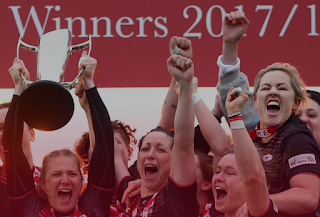 The message now needs to spread wider. Mainstream media really do need to get their act together on this, whilst the RFU could help themselves enormously by ensuring that all of the country's elite players - many of whom are gadding about the world playing sevens - are made available more often to play for their respective clubs.

Onwards and upwards...
Posted by TotalFlanker at 10:43 No comments: Links to this post

An Open Letter to the British & Irish Lions 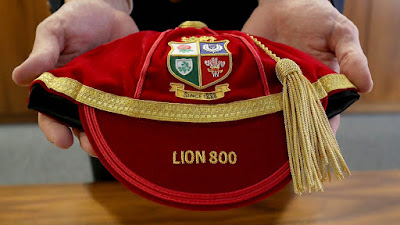 I write to express my delight that, to mark the 130 year anniversary of the first British & Irish Lions game against Otago in Dunedin on 28 April 1888, you have decided to award a hand-stitched ceremonial cap to 419 living Lions players and the relatives of 416 deceased Lions.

Missing out on the last three tours in particular has been quite galling, especially given my return to the game after a 13 year hiatus in 2007 and my hat-trick of tries against Datchworth 4th XV two years later, not to mention my frankly stunning form in Touch Rugby for the past 12 seasons.

At no point has Ian McGeechan, Warren Gatland or anyone else associated with the British & Irish Lions contacted me to explain exactly why I have been omitted from the squads which, you have to admit, is more than a tad rude. If only for this reason I feel I deserve one of your lovely caps.

If it helps I am willing to send you a cheque or postal order to cover the cost of postage and packaging - just let me know how much.

Posted by TotalFlanker at 06:59 No comments: Links to this post 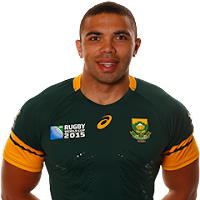 This blog's best wishes go to Bryan Habana who has announced that he will retire at the end of the season.

The 35 year old Habana, who has struggled to make it back following knee surgery, can look back with fond memories on 124 caps for South Africa, 67 international tries and a World Cup winner's medal in 2017.

Posted by TotalFlanker at 00:05 No comments: Links to this post

So, Dylan Hartley is ruled out of England's summer tour of South Africa, having failed to recover from the concussion sustained during last month's Six Nations defeat to Ireland.


Whilst wishing him a speedy recovery, perhaps this a blessing in disguise for England given Hartley's indifferent form for some time now, although his injury does mean that he now joins a long list of the walking wounded who will not make the tour, a list which includes the likes of Nathan Hughes, Courtney Lawes, Jonathan Joseph and Anthony Watson.

Added to that is another list of players - which includes Hartley's obvious replacement at hooker, Jamie George and leadership candidates such as Owen Farrell and Maro Itoje - who are frankly knackered and need a rest having been on the international rugby treadmill for the past couple of years.

All of which means that Eddie Jones will have his work cut out this summer - time to start earning his not insubstantial salary, methinks.
Posted by TotalFlanker at 12:00 No comments: Links to this post 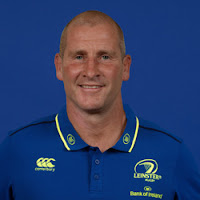 Leinster's dismantling of the Scarlets this weekend in the Champions Cup semi final was mightily impressive.

And at the heart of what is turning into one of the best ever Leinster squads is senior coach Stuart Lancaster.

Yes, that Stuart Lancaster, the chap who was pilloried from all quarters following his England team's elimination from its home World Cup group stages in 2015.

The fact is that Lancaster was and still is a fine coach and a thoroughly decent bloke.

Where he failed with England was ultimately with selection and with getting the preparation for the World Cup badly wrong.

And even then he did the decent thing by accepting responsibility and stepping down.

With Leinster in the Champions Cup final his redemption is almost complete.

Posted by TotalFlanker at 11:04 No comments: Links to this post 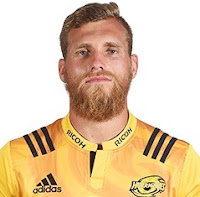 In a possible tug of war between England and the NZRU over the services of Hurricanes backrower Brad Shields this summer, there is only one likely winner.

Shields is eligible for England via parentage and has signed to play for Wasps next season, enough for the RFU to give Eddie Jones the go ahead to select him for England's tour of South Africa in June.
Jones wants to select the player and Shields, given that he appears to have requested to be released for the tour, wants to go.

As World Rugby regulations require the release of selected players during any international window it therefore seems that, despite their protestations to the contrary, the NZRU have little choice but to comply.

My only question is why the rush? Shields arrives in the Premiership in September. Why not see how he gets on and then (call me old fashioned) select him if he demonstrates that he's good enough?
Posted by TotalFlanker at 09:21 No comments: Links to this post

The fallout from Israel Folau's public declaration of his views on homosexuality refuses to go away, despite Rugby's Australia's somewhat pathetic attempts so far.

Folau's comments on social media - that gay people were destined to a life in hell unless they repented for their "sins" - have so far been met with condemnation from all quarters other than from Rugby Australia who, desperate to cling on to their prized asset, have even commented that they "accepted Israel's position".

Does Folau have the right to express his views publicly, no matter how abhorrent?

Does he have the right to do so without consequence or sanction?

Absolutely not, especially where such views are so clearly at odds with his employer's public commitment to inclusiveness and the universal values of rugby.

Folau has, more or less, threatened to quit the sport if sanctioned.

Rugby Australia needs to grow some bollocks and call him out on this one.
Posted by TotalFlanker at 07:36 No comments: Links to this post 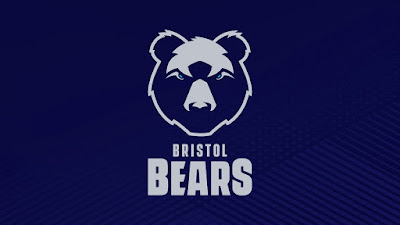 Some 16 days late for April Fools’ Day, Bristol Rugby has announced that, having allegedly spent the best part of the last 18 months carefully considering “how best to shape its long-term future”,  the answer is, apparently, for the the club to become known as the Bristol Bears with effect from 1st June 2018.

Owner Steve Lansdown says that he wants to “shake up the status quo”, although what he has against the masters of the three-chord boogie is anyone’s guess.

In being so innovative, Bristol Bears will join Exeter Chiefs, Sale Sharks, Worcester Warriors and Newcastle Falcons in the Premiership as clubs whose names have no bearing whatsoever to their location, traditions or history.

Meanwhile there is an account director at a marketing agency somewhere laughing all the way to the bank...
Posted by TotalFlanker at 12:11 1 comment: Links to this post 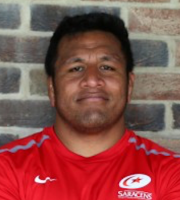 Mako Vunipola was impressive again for Saracens against Bath yesterday but really should have been sitting in the stands with his feet up.

Under the terms of the agreement between the RFU and Premiership Rugby, Sarries should have rested Vunipola for one of the four weekends after the Six Nations, something they chose not to do.

Yes, Saracens have next week off anyway, but why have an agreement if clubs can choose to ignore it without sanction?

Another example of the powers-that-be merely paying lip service to the concept of player welfare, methinks.

Posted by TotalFlanker at 10:24 No comments: Links to this post 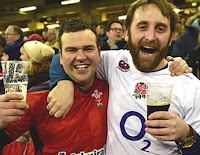 Apparently the WRU are planning to ban alcohol on a trial basis, creating a "dry" section in the Principality Stadium for the November autumn internationals.

The booze ban follows various reports of drunken fan behaviour including supporters in the stadium being showered with beer and, in one instance, "a tirade of foul language" being directed at disabled man.

The WRU are dressing the ban up as “customer choice” – but what about those fans who are perfectly capable to going to a match, having a few beers and behaving perfectly responsibly?

Surely the obvious response to the misbehaviour would be to adopt a zero tolerance approach to the idiots who behave so obnoxiously and boorishly…?

Or are the WRU effectively saying that, other than in a small section of the stadium, getting utterly shitfaced and acting like an total twat is now deemed acceptable?

And what's to stop someone getting tanked up at the pub before the game and then behaving like a complete wazzock in the sober section of the stadium?
Posted by TotalFlanker at 17:14 No comments: Links to this post

So, Rugby Australia and the New South Wales Waratahs are asking Israel Folau to explain himself  after he commented on social media that God's plan for gay people was:

"HELL.. Unless they repent of their sins and turn to God."

Rugby Australia's CEO Raelene Castle has so far commented only that "Israel's comment reflects his personal religious beliefs" but that "it does not represent the view of Rugby Australia or NSW Rugby" - which, quite frankly, is nowhere near a strong enough condemnation of what was said.

Posted by TotalFlanker at 14:07 3 comments: Links to this post 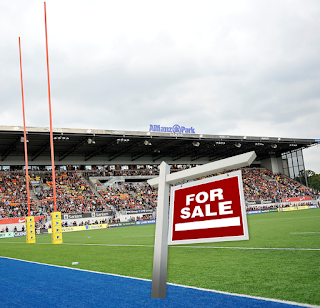 Apparently Saracens is not for sale. At least not according to their chairman Nigel Wray, despite co-owner Johann Rupert's decision to withdraw his financial support from the club.

Wray will now take full ownership of Sarries and apparently is "confident of finding new investors".

Which doesn't really suggest to me that the club is "not for sale".

It strikes me that this situation may offer a unique possibility. It is clear, at least to me, that in the long term something radical has to happen if the uneasy compromise that currently exists between the Premiership clubs and the RFU is to be addressed and more than lip service is to be paid to the issue of player welfare.

I've long thought that the RFU should partly be using its vast wealth to take more of a stake in the club game - and the opportunity to invest in the nation's most successful club in recent years should not be dismissed lightly.

I'm not saying it would be easy or, indeed, that an RFU investment in Saracens is currently feasible. But somebody, somewhere in the corridors of power, really does need to start thinking outside the box...
Posted by TotalFlanker at 13:01 No comments: Links to this post

Adam Jones - the Next Chapter 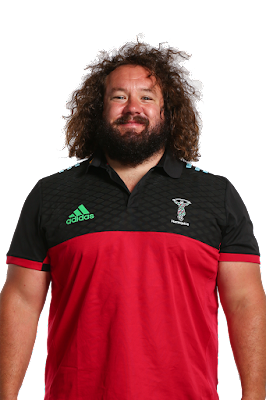 This blog would like to add its hearty congratulations and best wishes to legendary Wales and Lions tight-head prop Adam Jones who last week announced that he will retire from playing first-class rugby at the end of this season.
Jones has had a long and remarkable career, making his debut for Neath in 2000 and going on to earn 95 Wales caps (including 3 Grand Slams) as well as 5 caps for the Lions.
His retirement is more than well-earned and we wish him all the best for his future which will include combining his role as scrum-coach at Harlequins with his studies at the University of Cambridge.
Jones, who holds a First Class MSc from Cardiff University, will begin a 3 year PhD in Quantum Mechanics at Cambridge in October.
"I'm really looking forward to it" says Jones. "I've always been fascinated by Physics and have tried to apply my scientific knowledge to the mechanics of scrummaging over the years. However the PhD is another level altogether and will be by far the greatest challenge I've faced. I can't wait."
So does this mean that we may see Adam Jones in the 2018 Varsity Match?
"Honestly I've no plans to play rugby at Cambridge," he says. "But never say never."
Posted by TotalFlanker at 06:00 No comments: Links to this post