Time for Chris Ashton to grow up? 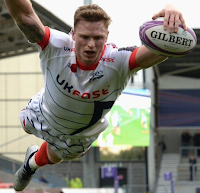 Predictably enough, Chris Ashton scored a hat-trick of tries at the weekend on his competitive debut for Sale Sharks as they sealed a 34-13 win against Connacht in the European Challenge Cup.

Equally predictably the so-called "Ash-Splash" is still very much in evidence. And I still hate it.

I don't suppose there is any chance of Ashton growing up any time soon.