Defeat to All Blacks a missed opportunity for England 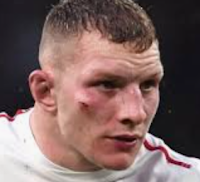 Whether Courtney Lawes was onside or offside on Saturday (and I think it was marginal - he was no more offside than most players on both sides all afternoon) is immaterial. He was adjudged offside, it was what it was and we move on.

What Lawes did show is that he can operate very effectively on the blindside at international level - I take it all back. However his performance, good as it was, still paled into insignificance next to that of England's openside, Sam Underhill, who was simply magnificent.

My overall emotion at the end of the match was, nevertheless, a sense of an opportunity missed. The All Blacks were there to be beaten on Saturday and England blew it.

That may seem harsh in the wake of a great effort from the England team and there's no shame in a one point defeat to the world's number one team, but there were definite chances to win that game that England let slip.

Whatever else happens this November, however, Eddie Jones suddenly appears to have an embarrassment of riches in the back row - with Underhill, Lawes, Mark Wilson, Tom Curry and Zach Mercer all having impressed in the last 2 weeks.
Posted by TotalFlanker at 09:28