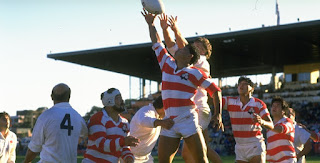 I was surprised to learn that Saturday's fixture between England and Japan is only the second time the countries will have met at test level, the first being at the 1987 Rugby World Cup, some 31 years ago.

If ever there was a stat which highlights the paucity of opportunity for so-called 2nd tier rugby nations then this is it.

The gap between the haves and have-nots of international rugby has also been highlighted by the revelation that the Japanese players receive a match allowance of the equivalent of £13.64 each per match when compared to the £25,000 match fee enjoyed by their English counterparts.

Although the pay gap is clearly ridiculous, former England Women's captain Catherine Spencer makes a very good point that, while fully supportive of players being very well paid by their clubs, a player should receive no match fee at all to represent his (our her) country - the money saved being ploughed back into the grassroots game.

That's never going to happen, of course - not least because a number of countries operate on a central contracts model - but it would certainly clarify the motivation of a number of players and identify those that see international rugby merely as a meal ticket.
Posted by TotalFlanker at 18:14

Have you seen Ben Ryan's piece in the Guardian.....

Yep, it's also pretty persuasive, but the big boys have always acted in their own interests and it's naive to expect this to change any time soon...