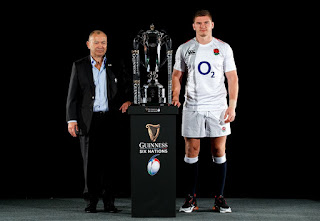 Yes, England were bloody good in Dublin at the weekend but any talk of a Grand Slam, or of England now being New Zealand's main challengers at the World Cup in 7 MONTHS time, is as silly as it is premature.

It can only be hoped that the England team are not indulging in the ridiculous self-congratulatory back-slapping which has been evident amongst the English rugby media who, it appears, have very short memories.

Pride, after all, comes before a fall and England are certainly going to have to be on their mettle this weekend if they are to avoid a rather large banana skin in the form of a French team intent on righting the wrongs of a self-inflicted defeat to Wales in Paris on Friday evening.

Let's enjoy last weekend's win but, for goodness sake, let's wait for a little more evidence of consistent quality from England before getting too excited.

I agree. Fantastic game at the weekend but a lot of work still to do.