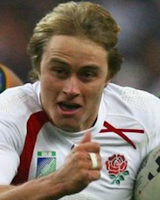 This blog's best wishes go to Mathew Tait who sadly has been forced to quit the game through injury, aged 33, following 15 years in professional rugby.

I always rated Tait who, after being prematurely selected and subsequently dumped from the England team by Andy Robinson in 2005, went on to establish himself as a superb attacking outside centre and, aged 21, was arguably England's best player in the 2007 World Cup final.

Unfortunately a combination of injuries and selectorial ignorance kept Tait out of the national set up after his last cap in 2010, something of a tragedy in my eyes given some of the donkeys who occupied the 13 shirt subsequently - and even a successful shift to fullback with Leicester failed to revive his international fortunes.

Rumour has it that he's now planning to become a commercial pilot - good luck to him...
Posted by TotalFlanker at 00:35