England Rugby: What is the point of Dan Robson? 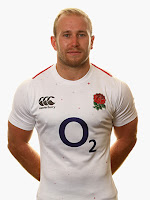 Whatever the merits of the changes Eddie Jones has made to the England team to face Italy this weekend, his most baffling call is the decision not to start Dan Robson - arguably the best number 9 in the Premiership over the past couple of seasons - at scrum half.

Having selected Robson ahead of the likes of Danny Care and Richard Wigglesworth for this year's Six Nations, Jones has since allowed the Wasps scrum half little more than 10 minutes international rugby, against a well beaten France, with Robson merely gathering splinters in his arse on the bench for the rest of the campaign.

Given's Robson's lack of international experience it is beginning not to bode well for his chances of making the World Cup squad later this year. After all, if Jones only rates him to this extent then you have to ask why Robson is in the squad.

In other words: what is the point of Dan Robson?
Posted by TotalFlanker at 13:01