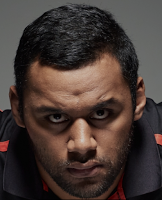 Sorry to keep going on about it, but I am so disappointed that there has been no apology from Billy Vunipola thus far for his support of Israel Folau's homophobic social media post, nor has his own offensive Instagram post been deleted.

Insensitively awarded Man of the Match against Munster last Saturday by BT Sport (although admittedly he did play well), Vunipola could have used the platform to issue a heartfelt apology to those hurt by his actions, but chose not to do so.

"I believe in what I believe in" is as unapologetic as it gets. He simply appears not to regret his actions.

Instead we witnessed BT Sport's unedifying and ludicrous attempts to paint Billy as some kind of victim in all of this - "toughest week of his life" etc - suggesting by implication that all is now forgiven simply by him playing well for Saracens.

I've long been a fan of Billy Vunipola, both as a player and as a character. This episode, however, undoubtedly sours my opinion of him. I had thought that the formal reprimands issued to Vunipola by both the RFU and Saracens amounted to a proportionate response. Without an apology, however, such sanction is meaningless.