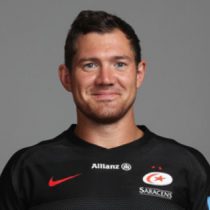 Many congrats to Saracens - deserved winners in a brutally intense European Champions Cup final against Leinster at Newcastle's St James' Park yesterday - and to Alex Goode, voted European Player of the Year.

Goode had another excellent game for Saracens yesterday, having maintained a consistently high level of performance throughout the season, bringing his usual guile and creativity to the Sarries backline.

Naturally enough many wonder why someone can be, year on year, the Premiership's best fullback and yet cannot break into the England team.

Clearly, for Eddie Jones, something is missing. Whether that something is the lack of a yard or two of pace at international level, a perceived lack of aggression or an apparent defensive vulnerability, I'm not sure. What is clear though is that Goode has, in the past, come up a bit short when playing fullback for England.

Might Goode be worth another chance with the World Cup looming? Certainly his performances for his club would merit another opportunity but, at 31, the chances of Goode getting another bite at the cherry ahead of the likes of Daly, Watson, Nowell or Brown are fairly slim I feel.

He may just have to make do with being a legend at Saracens and the best fullback in the Premiership.