I'm really quite impressed by the new ‘Women in Rugby’ campaign launched by World Rugby this week.

The campaign - ‘Try and Stop Us' - using the inspiring stories of 15 "unstoppable" women and girls involved in rugby - is aimed at driving increased participation and engagement among players, fans and investors in women’s rugby. 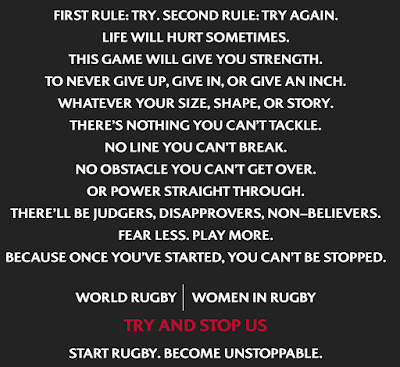 The women’s game is undoubtedly one of rugby's success stories, with participation levels currently at an all-time high.  For the second year running, apparently, more young girls than boys have started playing rugby globally - a remarkable stat in itself.

So, onwards and upwards for women's rugby - check out the campaign at www.women.rugby
Posted by TotalFlanker at 00:05