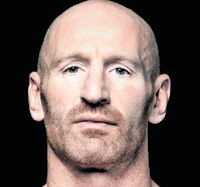 Revelations by former Wales and Lions winger Gareth Thomas, that he has been living with HIV for a number of years, are as brave as they are shocking.

When Thomas came out as gay nearly ten long years ago I have to admit I was a tad cynical about his motivations for doing so.

I absolutely realise now that I was wrong.

For a professional sportsman to have had the courage to come out as gay so publicly was really quite remarkable and Thomas has since gone on to be a passionate and eloquent advocate for LGBT rights and campaigner against homophobia.

To admit to having HIV, however, and to challenge the stigma and taboos around the illness, takes his bravery to a new level.

Respect.
Posted by TotalFlanker at 12:20