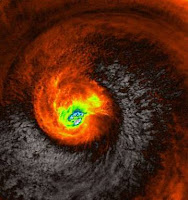 If Super Typhoon Hagibis hits Tokyo on Saturday - as it is scheduled to do - then the decision to cancel the the England v France and New Zealand v Italy matches on safety grounds is, surely, the right call.

Clearly you can't play rugby in a super typhoon, although whether the organisers ought to have had contingency plans to play the fixtures elsewhere is another matter.

As things stand, the cancelled fixtures do not have a significant bearing on the tournament with qualification from pools B and C already settled (more or less).

Pool A, however, is a different story.

If Japan v Scotland on Sunday is cancelled then Japan go through as pool winners and Scotland go home.

Scotland would, effectively, be knocked out of the World Cup by the weather.

Which would be as unfair as it would be extraordinary.
Posted by TotalFlanker at 08:15