The Game Nobody Wants to Play 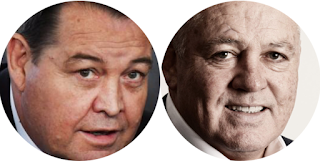 The "make sure he enjoys the third and fourth place play-off" jibe aimed by Eddie Jones at Warren Gatland, after Gatland had suggested that England had already played their World Cup Final in beating New Zealand last week, was right on the money.
Because, after seven long weeks,  no one - not the players, not the coaches and not even the fans - are interested in a fixture to decide who comes third. I mean, who really cares?
After a semi-final defeat I'm sure the vast majority of players simply want to slope off home. I know I would.
The third-fourth play off is the game nobody wants to play.
World Rugby should seriously consider canning it for future tournaments.
Posted by TotalFlanker at 12:00

A Plate sub-tourny featuring the teams that finished third in each group would be far more entertaining.

To be honest, if it's these two teams playing in it I'm fine with this play off. Maybe I'm just being a bit naughty, depends on your point of view. Come on my boy's make us proud on Saturday.

Tee Cee
Nice to see wayne Barnes giving Wales a pity try.adams was no where near the whitewash.how embarrassing