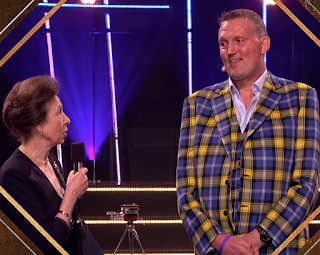 It was an honour and privilege to watch Doddie Weir be awarded the BBC Sports Personality of the Year Helen Rollason Award on TV last night.

The award is given annually "for outstanding achievement in the face of adversity" - something for which Weir is eminently qualified, having thrown himself with typical gusto and good humour into raising more than £4m for research into Motor Neurone Disease and to help those suffering from the disease since his own diagnosis with MND in late 2016.

Much of Doddie's struggle - as well as his life as a rugby player straddling the amateur/professional eras - is documented in his excellent autobiography - My Name'5 Doddie - which I have recently read and which I heartily recommend.

Good luck with your continued fight against this dreadful, debilitating disease Doddie - your award last night was so richly deserved.
Posted by TotalFlanker at 10:32