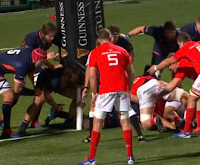 On the search, as ever, for a slightly left-field rugby story, I came across the discussion surrounding an innovative tactic, employed by Edinburgh against Munster at the weekend, of lifting the protective padding around the goalposts to prevent the scoring of a try.

The tactic, employed twice by Edinburgh by props Pierre Schoeman and Pietro Ceccarelli, is clearly dangerous and there is no doubt that World Rugby need to make it abundantly clear that such practice is illegal.

That said I have always found the law that enables a try to be scored when a player grounds the ball against the opponents’ goalpost (or surrounding padding) to be grossly archaic, ridiculous and unfair, as it rewards teams for not crossing the whitewash and, from a breakdown on the line and next to the goalposts, makes it impossible to defend the posts without being offside.

World Rugby could do everyone a favour by ruling that the ball must touch the goal line for a try to be awarded...
Posted by TotalFlanker at 10:57