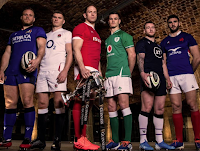 What with the Rugby World Cup having only just concluded (or that's how it seems to me) and with one or two other matters dominating the rugby headlines of late, the 2020 Six Nations appears to have caught me slightly unawares, having snuck up on me somewhat, like a sneaky ninja blindside flanker ready to charge down my ridiculously telegraphed box kick.

And yet here we are, about to embark on another seven weeks of Northern Hemisphere international action and, with four of the six participating teams featuring brand new coaching teams, who knows what lies ahead?

Still, it remains incumbent upon me to at least try to make sense of what is ahead, so what follows is my utterly objective and fair analysis (of course) of what we might expect to see over the coming weeks.

In no particular order:

WALES
With Warren Gatland now gone, I am intrigued to see how Wayne Pivac's new Wales team will perform. Will Warrenball - taken to extremes by Wales in the World Cup Semi Final - be consigned to history to be replaced by the free flowing style favoured by Pivac at the Scarlets? Or will the Welsh players revert to type? Tough away trips to Dublin and Twickenham mean that it is highly unlikely that Wales will manage to repeat last year's Grand Slam, so the three home fixtures vs Italy, France and Scotland will be critical. If I was a Welsh rugby fan - which i'm not - talk of George North being re-assigned to the number 13 shirt would worry me, but it will be great to see Toby Faletau back playing at international level.

SCOTLAND
One of only two teams to have retained their head coach post-World Cup, although I would imagine that Gregor Townsend must be skating on slightly thin ice after his team failed to make it out of the group stages in Japan. His fall out with fly half Finn Russell will almost certainly hang over Townsend and this Scotland campaign but a win in the opening fixture vs Ireland will go some way to vindicating the head coach and cementing his authority. Lose and play badly, however, and the knives will begin to be sharpened. Realistically Scotland can beat any of the other teams on their day, but are maddeningly inconsistent, veering from awful to sublime (and on occasion in the same match as witnessed at Twickenham last March). Still, I'm confident that they will fancy their chances of another Calcutta Cup win at Murrayfield this year.

ITALY
A new coach (Franco Smith) and new captain (Luca Bigi) for Italy but prospects remain the same as ever as it is expected that the Italians will once again claim the unwanted prize of the Wooden Spoon. It will an unusual championship for Italy, with legend Sergio Parisse not involved for most of this Six Nations but set to return to the team for a farewell performance in the final game against England. That in itself is a strange call and possibly a huge distraction, but Italy do have to move on from the great man at some stage and, whilst unorthodox, this is one way of doing it. Italy start against Wales in Cardiff as massive underdogs and deservedly so. Best hope for a victory is probably at home to Scotland.

FRANCE
Nineteen new caps in the French training squad means that the phrase "You never know which France will turn up" is as true as it ever was. With new head coach Fabien Galthie in charge it impossible to know what to expect, other than it looks as if he will give youth a chance and - with France having won the last two World U20 Championships - it is clear that there is talent available in abundance. I would be surprised if youth and talent alone will be enough triumph over age and treachery to win this year's Six Nations but, as part of long-term planning for the World Cup in 2023, I have to say Galthie's selection policy makes a certain sense. And you never know - victory in the opening fixture at home to England could just generate the confidence and momentum that sees the French spring a major surprise.

IRELAND
Another team with a new man in charge - step forward Andy Farrell. There is no doubt that 2019 was massively disappointing for Ireland - 12 months ago many had the Irish down as potential World Cup winners. What followed was a poor Six Nations followed by an even worse World Cup, defeat to Japan in the group stages being the pre-cursor to a thumping at the hands of the All Blacks.  Farrell's challenge with this Irish team is now to attempt to remove the tactical straightjacket that appeared to restrict them under Joe Schmidt and allow some of their undoubted talent to flourish. If Ireland can reproduce some of the form shown by Leinster in Europe this season then they won't go far wrong but my instinct is that this might be a difficult tournament for the men in green.

ENGLAND
If England fail to impress during this year's tournament Eddie Jones can justifiably turn to a number of excuses, including an almost inevitable hangover from losing to South Africa in the World Cup Final as well as the after-effects of the recent salarygate scandal on England's numerous Saracens players. The reality, however, is that there is no reason why England shouldn't be ale to reproduce the form that saw them see off Australia and New Zealand in successive weeks in Japan. If they can do that, then results will look after themselves. If their standards dip, however, as occurred under the intense pressure applied by the Springboks in the Final, then who knows? What seems clear is that Eddie Jones is willing to risk not refreshing the scrum half stock and not picking a recognised number 8 in the squad, thus challenging (intentionally or not) the England squad to win it the hard way.
Posted by TotalFlanker at 14:19

I agree, all sounds like sensible stuff as per usual. However, for me the proverbial elephant has to be discussed further.

I'm talking no Sam Simmonds, no Alex Dombrant and no Ben Spencer! Not even involved with the squad? I'm not looking to make wholesale changes but Billy is crocked, again, and our s/h's are getting on a bit. Surely these guys need to be involved now?